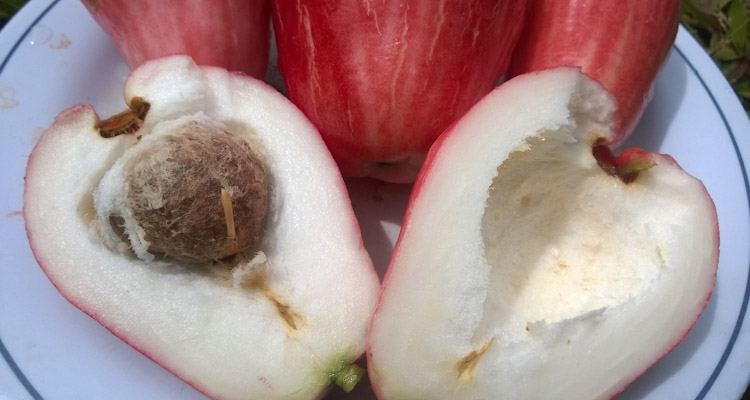 This afternoon, while I was picking some French Cashews, I noticed that the trees were flowering once again. Curiosity got the better of me, so I decided to do a bit of research, both online and around the island.

I confirmed that French Cashews are available between May and July in Grenada. The peak season is around the middle of June. Some trees, planted close to rivers, produce multiple crops in one year.

While seeking this information, I discovered some pretty interesting facts about this fruit. Let’s take a closer look at this tasty treat, as well as some simple things you can do to enjoy it throughout the year.

Grenada is a tiny island. However, the climate differs within Parishes at times. These differences affect the fruiting of various trees, such as French Cashews.

I contacted some gardeners in different parishes to get their input. They were happy to share their observations.

They are as follows:

Some of the gardeners indicated that the fruiting season has been shifting slightly in recent years. However, most agreed that their trees are ladened around June. I noticed this as well.

Where Can I Find French Cashews in Grenada?

You can find Cashew trees throughout the island. In the past, many farmers planted them along rivers to help prevent soil erosion. When in bloom, they produce bright pink flowers. Many people also grow them in their backyards, possibly because of these beautiful flowers.

In most cases, the trees produce so many fruits that many people will gladly share at no cost. For instance, we usually give away the majority that we pick every year. Yet still, over 90% fall to the ground or into the river.

You can purchase them in and around the town if you don’t know anyone with a tree. French Cashews are sold by individuals, on the side of roads and in various farmer’s markets. They cost about $5 EC per bag. You get between 8 to 12 per bag, depending on the size.

Supermarkets seldom stock French Cashews because their short shelf life. However, they can remain fresh for about four days if picked carefully and stored in the refrigerator. Unfortunately, they tend to taste a bit sour within a day or two.

How To Choose A Tasty French Cashew?

French Cashews are usually pear-shaped, with red, waxy skin, which darkens as they ripen. Their flavors range from sweet to tangy, based on how and where they were grown.

There isn’t an exact science to choosing cashews, but there are a few things to keep in mind.

You have a greater chance of choosing a delicious fruit, using the points listed above. However, there are exceptions to the rules. Give it a try!

What Can I Do With Extra French Cashews?

French Cashews are easy to spoil. It is difficult to store them in the refrigerator. They also attract sour flies when left on the counter.

I was fascinated to learn that the green cashews are pickled and even cooked. I’ve never tasted this before, but I will try it out, within the next few weeks.

They are delicious ingredients in juices, wines, jams, jellies, and other recipes.

I like to add fresh, ripe cashews to salads. However, I was not successful with the jam. It was a bit difficult to work with due to the water content. However, going to experiment with some recipes soon. It is possible to create great treats with those extra cashews.

Are French Cashews Grown Outside Of Grenada?

French Cashews are not native to Grenada. They are not even French. They are grown in many countries throughout the world. Some cultures use the leaves, bark, and roots for medicinal purposes.

Initially, I could not find much information about it online. However, I realized what the issue was. French Cashew is a name used mainly in Grenada and Guyana. It is referred to by other names around the world.

Here is a list of different names for French cashews and the countries where they are grown:

I am not 100% sure about the Hawaiian Mountain Apple. It seems like a different variety, with a much smaller seed. I wonder if I should take a trip to Hawaii to check them out.

French Cashew is a popular treat throughout Grenada. It is usually available towards the end of the dry season, between May and July. It has tender skin with a short shelf life. It tastes great fresh!

When in season, they are sold at various vendor’s markets and on street corners. However, you can always get some from anyone who has a tree.

Despite the name, it originates from the Pacific islands. Its name differs from country to country. As a result, an alias had to be used to get information about it online.

How long do French Cashew trees take to bear fruit? The tree takes between 3 to 5 years to bear fruit. They are grown from seeds and generally prefer open sunny areas.

How tall do French Cashew trees grow? The tree usually grows between 15 and 40 feet if left untrimmed. However, it can grow taller than 50 feet.