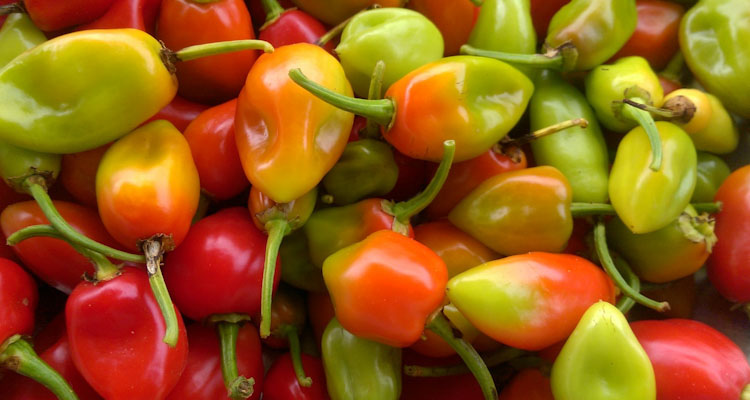 I was surprised when my Caribbean seasoning pepper trees produced a mixture of flavors from mild and spicy to blazing hot. I couldn’t explain what had happened, so I did some research.

Caribbean Seasoning Peppers, Capsicum Chinense, are mild varieties of Chili peppers originating from South America but grown widely throughout the Caribbean and other tropical regions. It is a crucial ingredient in many Caribbean cuisines, with flavor profiles differing from country to country.

In other words, these seasoning peppers are related to some of the hottest peppers in the world. However, for some reason, they maintain a mild flavor for the most part.

Seasoning peppers are valuable ingredients in many Caribbean kitchens and are priced according. You can expect to pay between $8 and $30 per pound for fresh and dried peppers.

This article will look at this spicy seasoning, including some exciting tips and other incredible facts. Let’s dig in!

Caribbean Seasoning Peppers, also called Pimento Peppers, usually grow to about 2.5 inches long and 1 inch in diameter. Their colors change from green to orange, red, or yellow as they mature. They have similar shapes and flavors as other Capsicum plants, minus the heat.

Pimento Peppers vary considerably in shape, from short and round to long and thin. Most varieties closely resemble their much hotter relatives, such as the Jamaican Scotch Bonnet. Sometimes, the only way to tell them apart is to taste them.

I’ve noticed that the color of certain varies indicates the intensity of the flavor, reaching its peak when the fruit is transitioning from orange to red.

What Are Other Names Caribbean  Seasoning Peppers?

Caribbean Seasoning Peppers, Capsicum Chinense, are native to the Americas. They are traditionally grown throughout the Caribbean, Central, and South America. However, they are now cultivated worldwide.

Some people also refer to these peppers as Chinese Capsicum due to the translation of the scientific name. This is a bit misleading but understandable.

What Are The Benefits Of Seasoning Peppers?

They are rich in vitamins, minerals, and other compounds, such as capsaicin, which shows potential in the management of Diabetes.

However, pimentos are used primarily for cooking. They are regarded as a critical ingredient in stews, soups, and sauces.

Seasoning Peppers provide the flavor of the much spicier relatives without the heat. Making it a treasured culinary delight.

Unfortunately, seasoning peppers are prone to possible contamination from pesticides and other chemicals used to grow and process them. As a result, you should be careful when choosing and handling them.

How To Use Seasoning Peppers

Traditionally, many people use Seasoning Peppers to season stews, soups, and meat. The excess is either dried and then turned into powder or combined with other herbs to make Green Seasoning.

You can eat them raw to add a spicy flavor to paste and sauces. However, most people cook it to unlock additional aromatic scents and fruity flavors.

While the final flavor is generally mild, you should be careful not to touch your face or eyes while handling these peppers. They can cause irritation to the skin and eyes in their raw form.

How To Grow Seasoning Peppers

Caribbean Seasoning Peppers are flowering plants and members of the Solanaceae family. They are tropical plants and favor warm temperatures, well-drained soil, and thrive in full sunlight.

Seasoning Peppers are easy to grow directly from seed or seedlings. However, most people prefer to transplant well-established seedlings since young plants are susceptible to soil-borne diseases.

First, to grow Seasoning peppers, sow the seeds in a well-drained potting mix. They should germinate within about 2 weeks in temperatures ranging from 24 to 30°C.

After generation, the seedling should be placed in a well-lit area and allowed to get direct sunlight for a few hours per day.

After about 6 weeks, you will have to decide whether to “pot up” to larger containers or transplant them to the garden once temperatures are favorable.

Apply mulch to keep the soil cool and moist, monitor them carefully, watering only when necessary.

Once the roots are well established, the plant becomes more tolerant to dry conditions. Check periodically for signs of pest damage or deficiencies.

How To Store Seasoning Peppers

Caribbean Seasoning peppers can produce upwards of 100 fruits per tree! Thankfully, there are many methods you can use to store the excess.

Here are three of the most common methods used to store seasoning peppers.

You can freeze seasoning peppers for later use without much effort.

Simply cut the pepper into smaller pieces, place them in an air-tight bag, and then into the freezer.

The peppers will no longer be crunchy but maintain much of their flavor.

Seasoning Peppers have a natural tendency to dry once picked ripe.

To hasten the drying process, place the peppers in the sun until they become brittle. You can slice them in two or remove the seed if you desire.

Once dried, you can crush them to make flakes or grind them into powder. Alternatively, you can use a dehydrator if sun drying is not an option in your area.

You can use Seasoning Peppers to make a variety of press drives such as ferments, pickles, sauces, and even jellies.

Many recipes, tutorials, and other tips are available online, showing you how to make these preserves.

The possibilities are endless! Feel free to experiment with different recipes and methods. It’s fun!

Where To Buy Seasoning Peppers?

Although Caribbean Seasoning Peppers are tropical plants, they are now grown and exported worldwide.

In the Caribbean, you can purchase Seasoning peppers at farmer’s markets, supermarkets, and directly from farmers. However, in most countries, you can find them at supermarkets or shops that sell products from the Caribbean.

I have not come across many online stores that sell fresh Caribbean Seasoning Peppers. However, you should be able to find dried or powered products in some countries.

Caribbean Seasoning Peppers have earned their place as one of the most valuable ingredients in Caribbean culture.

While they are mainly used in cooking, their nutritional contents suggest possible medicinal benefits.

I am still learning more about growing and preserving this precious plant and intend to be able to use it to its full potential one day.

Caribbean Seasoning Peppers can produce hot peppers under certain conditions. Genetically they are closely related to some of the hottest peppers in the world and possess the genetic potential to become spicy, either through cross-pollination or environmental factors.

What Is The Difference Between Seasoning Peppers And Hot Peppers?

The main difference between seasoning and hot peppers is the heat level, with seasoning peppers measuring less than 1000 on the Scoville scale. However, this can vary considerably between cultures due to tolerance.